We are happy to announce that Haema Sivanesan, curator at the Art Gallery of Greater Victoria is among the  6 fellowship recipients of the Curatorial Research Fellowship awarded by The Andy Warhol Foundation for the Visual Arts, which is awarding a total of $295,000 to six curatorial research fellows to encourage new scholarship in the field of contemporary art. Recipients will receive grants of up to $50,000 to support travel, archival research, interviews, and other activities.

Forest Breath- A Work in Progress This large format video projection project arose with the consideration of the forest as a space of research as well as contemplation, marking the beginning work towards a series of video installations within a  solo exhibition  (2019) at the Art Gallery of Greater Victoria with curator Haema Sivanesan.

After the preliminary work in June 2016, Sujir discovered the work of Suzanne Simard, UBC forestry professor, who talks about the forest floor as the place where the old growth trees function as archive for the grove, communicating through the forest floor, in a network we would perhaps liken to the internet. Additionally, in May 2017,  Sujir was an observer at the symposium lead by University of Victoria’s ethnobotanist Nancy Turner:  Indigenous Peoples’ Land Rights and the Roles of Ethnobotany and Ethnoecology: Strategies of Canada’ Future.

Sujir began in the Walbran with cinematographer Chris Kroitor, with a 3D rig fitted with two Sony 65 cameras (8K capability), to allow the viewer to stand in a forest of moving pixel images, in the same relation to the trees as they would have within the Walbran forest.

The experiments with time and space include a pull parallax, moving the space from relative flatness to an extended 3D: the space embraces  the viewer through the duration of a four to five minute shot. The work in progress shows the raw clips, prior to color correction or editing. Sujir’s intention is to work spatially with both the moving image and sound, for space as volume to be able to be perceived through the body.

The Walbran is scheduled for clear cut logging, which would mean the loss of this archive of time and space, held in the old growth trees. 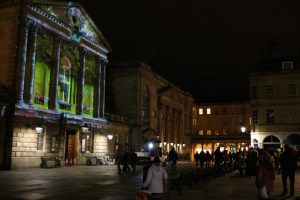 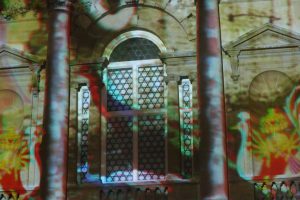 Introduction and Motivation
Despite the wide availability of specialized software several restrictions are still imposed on the type of objects/scenes on which projection mapping [PM] can be applied on. The most noteworthy are objects/scenes with (a) complex reflectance properties and (b) low intensity or distinct colors.

The project will research  these limitations and seeks solutions for eliminating these restrictions. The proposed work advances the theoretical understanding and practical development of techniques for automatically identifying and handling any problematic areas in the scene. Furthermore, the proposed research is expected to make substantial contributions to the solution of a complex problem of high practical relevance to the fields of media, visual, studio, and interactive arts. It will also contribute to the development of innovative methods in the general fields of immersive and interactive projection mapping, computer graphics/vision and computer
games.

Objectives
In this work we will conduct fundamental and applied research which is broken into two related and complementary sub-projects. The research objective (RO) for each sub-project is:
1. Identifying objects with complex reflectance properties.
2. Automatic color correction for areas with low intensity or distinct colors.